After the official first unveilings took place on 4 May 2015 (see Newsletter #2), stones were unveiled again in June and August this year, with Mr and Mrs Tof as relatives of the Tof family from Adderstraat in Veendam also present on 6 June. Furthermore, pupils and teachers of Winkler Prins comprehensive school were involved in the unveiling of the commemorative stones adopted by the school (in Verlengde Kerkstraat in Veendam).

On 13 October, on the occasion of the unveiling of the last 32 of the 164 memorial stones laid in Veendam and Wildervank, an official ceremony was held, analogous to what happened on 4 May 2015.

This ceremony took place in Veendam in the building, which houses the Culture and Congress Centre vanBeresteyn and the Veenkoloniaal Museum. In addition to the speech by the SHVW president, the mayor of Veendam, Chief Rabbi Jakobs and Ms Dye-Bendik, who was the next of kin of Philippus Bendik and Meereltje Levie, spoke.

An impressive moment was the screening of a short film, recorded before the Second World War on the occasion of the appointment of Izak N. Polak -in the synagogue in Veendam- as honorary chairman of the Jewish community in Veendam and which further painted a picture of Jewish life in Wildervank in particular.
Subsequently, two students from Winkler Prins Scholengemeenschap and two from Ubbo Emmius read out the names of all deported and murdered Jewish residents, listened to by those present standing up.

The ceremony was musically enriched by the Klezmer Ensemble "Sidaro" and three members of this orchestra also provided the music during the unveiling of the stones. 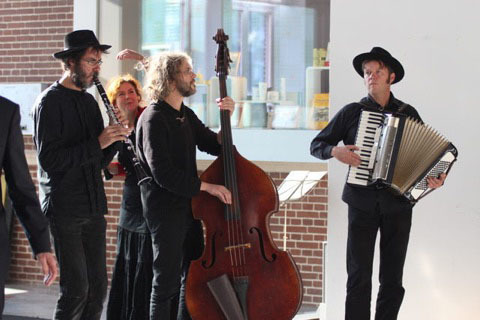 After lunch, the relatives -from England and the Netherlands- and other attendees were transported by bus to the seven locations where the stones were unveiled.

With this, the Stichting Herdenkingsstenen Veendam-Wildervank has completed the laying and unveiling of the stones, in the space of more than six months. This was possible thanks to the excellent support from the municipality of Veendam, but also thanks to the efforts of the paving company that actually placed the stones. Thanks also to Jaap Drok, Jan Kalk, Harm Venema, Rob Vleesblok, all sponsors, and the Veendam police and city guards. 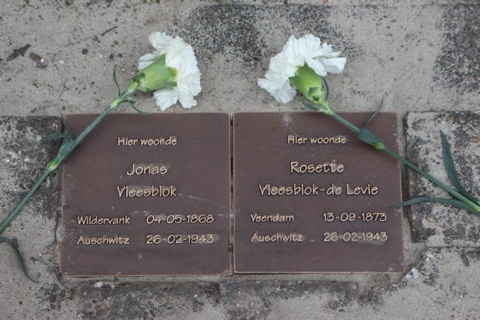 Does this complete the work of SHVW? Certainly not, as the focus in the coming years will be on education.