On 4 May 2015, after an intensive period of preparation, the official unveiling of the Remembrance Stones in Veendam and Wildervank took place. Prior to the unveiling, at seven locations in the municipality of Veendam, a meeting was held at the Margaretha Hardenberg Cultural Centre (MHC) in Wildervank, attended by 175 attendees.

Speeches were given by Koos Gräper, chairman of SHVW, Sipke Swierstra, mayor of Veendam, Dirk Mulder, director of the Remembrance Centre Camp Westerbork and Moritz Tof, next-of-kin (grandson) of Mozes Tof and Johanna Tof-van Dam. To express the involvement of the schools in Veendam and Wildervank, the names of all 201 Jewish inhabitants deported and murdered from Veendam and the former municipality of Wildervank were read aloud at the end of the ceremony by pupils of primary schools and the two secondary schools in the municipality of Veendam. Musical accompaniment during the ceremony and at the unveilings was provided by the musicians of Klezmer & Co and singer Carla da Silva. 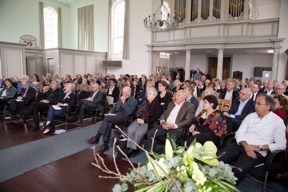 After the ceremony at the MHC, the very first stones, bronze plaques with overlaid text, were unveiled at the house on Nijverheidskade 77 in Wildervank, the house where Joël van Delft lived with his parents Abraham van Delft and Frouke van Delft-van Emden. The curtain was removed by Mrs Boekelman-Wortmann, Joël's former playmate, and Piet Horst, the initiator of the "stone project". After the unveiling, speakers included the mayor, who thus underlined the commitment to the project on the part of Veendam municipality. Stones were then unveiled at six other addresses: Sarastraat 17, Nijverheidsstraat numbers 39, 44 and 69, Raadhuisstraat 62 and J. Kammingastraat 123. At almost all addresses, the word was spoken or a prayer (kaddish) was said by a relative. The unveiling concluded with the laying of a flower at each stone, followed by music, again performed by Klezmer & Co.

Prior to the ceremonies on 4 May, the educational project - an essential part of SHVW's work - was carried out in the period 14 April to 1 May. Guest lessons were given by Bert van Vondel at nine primary schools, always concluded with an unveiling of stones near the respective school.

On 30 April, stones were unveiled at two locations in the presence of pupils and teachers from secondary schools in the municipality, and Veendam, and in the presence of a delegation of pupils, tutors and veterans from Kelowna, Canada. In all these laying, pupils fulfilled an important role by reading poems. Musical accompaniment was provided by Auke Eringa. 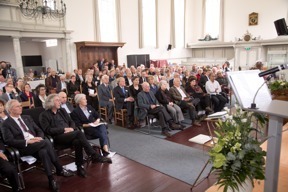 The meeting and subsequent unveiling of the memorial stones on 4 May 2015 concluded the first phase of the project. Three more "laying periods" will now follow, the first of which will be realised at the beginning of June 2015 in the presence of some relatives. The third "laying" or unveiling will follow in mid-August 2015. The project will conclude with a fourth period, which will again be attended by a group of relatives on 13 October 2015. 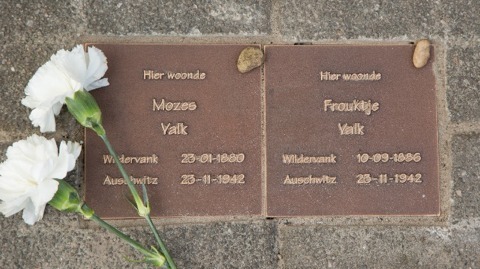